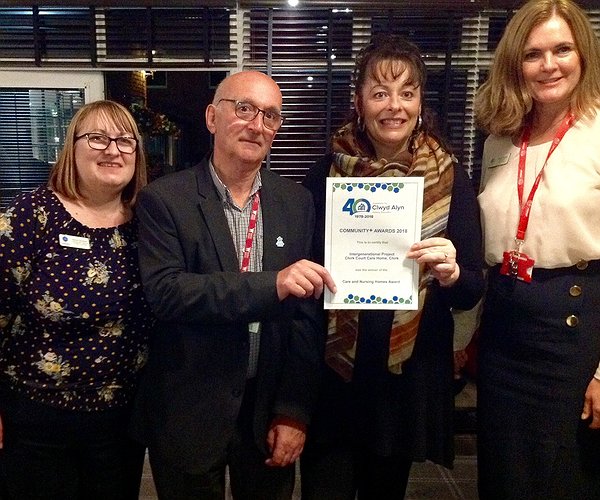 Chirk Court in Chirk won the ‘Care and Nursing Home Community Plus Award at the annual meeting of Clwyd Alyn Housing Association recently.

More than 200 residents, staff members and guests from partner organisations from across North and Mid Wales attended the AGM where awards were presented to individuals and to schemes that have made a great contribution to their local community areas.

The awards were part of a celebration to mark the 40th anniversary of Clwyd Alyn showing how it has grown from employing 2 staff in 1978 to becoming an important part of the Welsh economy, providing vital services employing 700 people with an annual turnover of more than £40 million a year.

Chirk Court was nominated for the award by local Town and Community Councillor Frank Hemmings who is the local Dementia Champion within the Chirk.

Cllr Hemmings praised the care home for ‘working tirelessly to develop and establish a dementia friendly community and care home which operates with an exceptional reputation in both Chirk and the wider Wrexham community.’

Tributes were also paid to staff at the home and links made with both the local community and with external partners who help provide a wide range of stimulating activities at the home for residents to enjoy.

Residents from the Rosehill area of Brynteg, Wrexham were also recognized, winning the General Housing Award for the Maes Eithin Community Event helping to bring the community together with an educational and recreational trip to the Welsh Mountain Zoo.

Mrs Edwards praised staff and residents who make such a difference to local communities across the region: “I am very proud of Clwyd Alyn and all that it has achieved over the last 40 years. These awards show how caring for people continues to be at the heart of all we do.”

Dr Sarah Horrocks, Chair of Clwyd Alyn said: “Clwyd Alyn stands for so much within the Community. It’s mind-blowing to think of the number of people that we’ve helped over the years and will continue to help in the future.”

Paying tribute to all who have been part of Clwyd Alyn helping it to provide housing services across the region, Clare Budden, Group Chief Executive added: “I want to build on the successes of the past and keep the company growing, modernising and innovating as we move forward.”