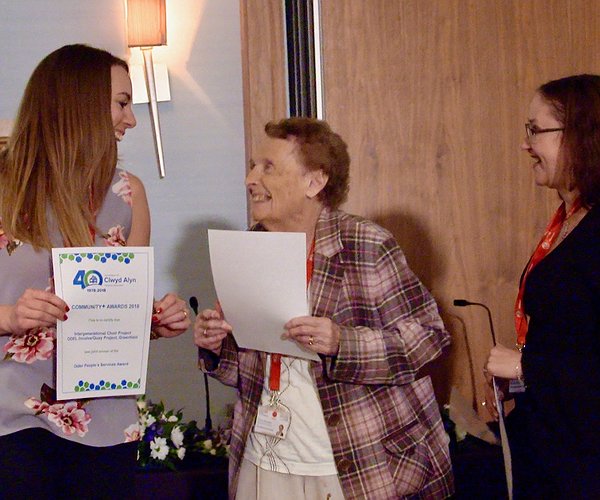 Schemes supporting residents across Flintshire have been presented with ‘Community Plus’ Awards at the annual meeting of Clwyd Alyn Housing Association.

More than 200 residents, staff members and guests from partner organisations from across North and Mid Wales attended the AGM where awards were presented to individuals and to schemes that have made a great contribution to their local community areas.

The awards were part of a celebration to mark the 40th anniversary of Clwyd Alyn showing how it has grown from employing 2 staff in 1978 to becoming an important part of the Welsh economy, providing vital services employing 700 people with an annual turnover of more than £40 million a year.

As well as recognising all sections of the housing and support services, the overall winner of the ‘Mrs Eurwen Edwards Award,’ named in honour of the Association’s Honorary President and Founder Member, was the ‘Beyond the Boundaries’ Team based at the Llys Eleanor Extra Care scheme in Shotton.

Beyond the Boundaries is a social enterprise offering tenants therapy treatments such as head or shoulder and neck massages, reflexology, and hair and nail treatments while also offering independent living skills to young adults with additional needs.

Awards were presented by Mrs Edwards, along with Louise Blackwell, Community Development Officer for Clwyd Alyn.

Mrs Edwards praised staff and residents who make such a difference to local communities across the region: “I am very proud of Clwyd Alyn and all that it has achieved over the last 40 years. These awards show how caring for people continues to be at the heart of all we do.”

The Erw Groes Family Centre in Holywell won the ‘Supported Living Award’ for their Sensor Play Centre which provides a specially designed safe sensory area helping children and young people to relax and remain calm and the Sensory Garden at Greenbank Villas in Flint was named as ‘Runner-up’ in this category.

The ODEL Involve advice and support service, based at the Old Court House Café and Community Hub in Flint was a joint winner of the ‘Older People’s Services Award’ for an innovative inter-generational choir initiative where residents from Supported Living Schemes teamed up with residents from extra care schemes in the area.

Residents from the Nant Mawr Court Sheltered housing Scheme in Buckley were named as ‘Runner-up’ in this category recognising their hard work improving communal garden areas at the scheme.

Dr Sarah Horrocks, Chair of Clwyd Alyn said: “Clwyd Alyn stands for so much within the Community. It’s mind-blowing to think of the number of people that we’ve helped over the years and will continue to help in the future.”

Paying tribute to all who have helped Clwyd Alyn to grow over the years, Clare Budden, Group Chief Executive added: “I want to build on the successes of the past and keep the company growing, modernising and innovating as we move forward.”

The Care and Nursing Homes Award was presented to Chirk Court in Chirk for its commitment to supporting a Dementia Friendly community in the area.

The Inspirational Volunteer Award was won by Lauren Williams, a tenant at Isallt, Llandudno and the runner-up a was the llys Alyn Enhansing Lives Project in Rhos-on-sea.