What does Pride mean to you?

During the month of June many people reflect on this question as they celebrate Pride month. For some this might mean the feeling of freedom after being trapped by social ‘norms, for others it simply means love and acceptance and for other people it could mean that you can now be your authentic, unapologetic self.

ClwydAlyn is proud to say that it’s an inclusive and diverse organisation. It welcomes those from every background, and this month we’ve been hearing from Extra Care residents Terry and Colin Smith-Cheetham on what Pride month means to them and how they celebrate being together. 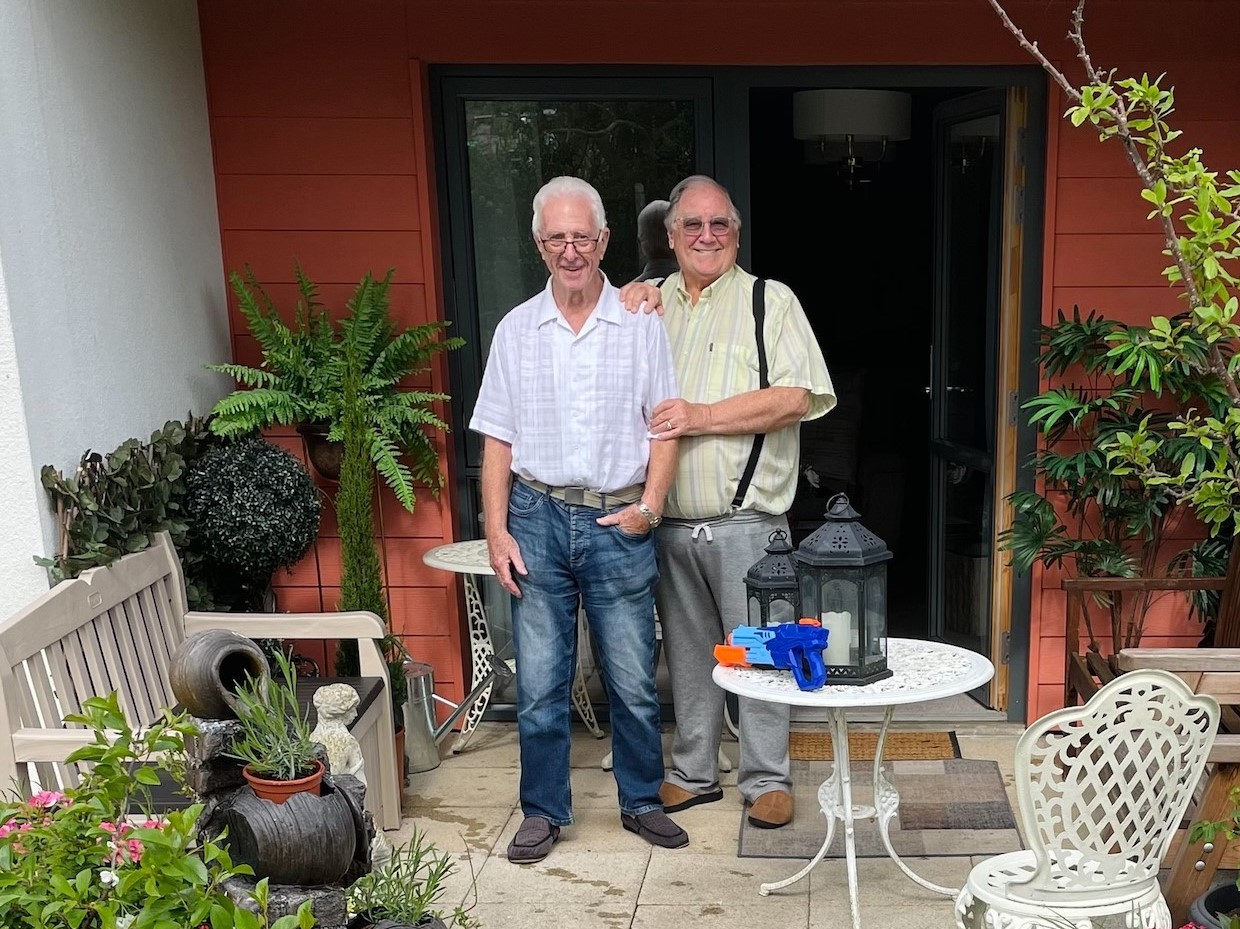 Terry and Colin are residents at Tan Y Fron Extra Care scheme in Llandudno and have been together 53 years and counting. They made the decision to move to ClwydAlyn’s Extra Care facility earlier this year.

“We made the decision to move into Tan Y Fron following Colin’s dementia diagnosis. We wanted somewhere that would adapt as we got older, and this is exactly what this facility offers us. Honestly, moving here was the best decision for us. So far, the scheme has provided us with an amazing support network, and I wouldn’t want to live anywhere else.”

The couple first met when they were both working as Flight Attendants for British Airways in the 1960s, initially meeting in Nairobi, Kenya, then New York, then getting together in Manchester. Colin comes from Llanfairfechan and Terry from London, and they lived together from their early 20s in Heathrow while continuing to work for the airline.

Their future careers saw Terry move to a job as PA to a Chairman of a large American company, while Colin enjoyed a happy 32 year period, working in appliances for Iceland foods.

The happy couple tied the knot in 2006, and throughout their longstanding relationship they’ve enjoyed seeing the world, relishing the calm seas and warm temperatures by going on annual cruises.

“We’ve lived an amazing life, travelling world together and seeing amazing things. However, life has caught up with us and it’s time now that we slow down a little.

“I’m so happy that we made the decision to move to Tan y Fron, we’ve adjusted well here, and that’s been made a lot easier due to the fact that the staff have been so caring and that the residents have been incredibly welcoming. It’s like a community in itself, meeting other residents in the scheme for lunch, and attending various fun activities throughout the week. We’ve even made friends with three other residents that were previously flight attendants, giving us the chance to talk about the past and reminisce on our amazing memories.”

Pride for Terry and Colin means seeing how equality for the LGBTQ+ community has come such a long way in the time they’ve been together.

“We’ve never had any issues and it’s so good that people can be open now. We’ve had the most amazing life together and I would say just do what you can do, and most of all, enjoy what you’re doing!”

This year marks the 50th anniversary of the first Pride march in the UK – a day when hundreds of LGBTQ+ people and their allies arrived in London to protest a society where we were not safe to be ourselves.

50 years on, we can take pride in a United Kingdom where the majority of the public are supportive of their LGBTQ+ neighbours, work colleagues, family and friends.

Today, we live in a society where LGBTQ+ people can live openly and free, where we can form our own families and where our lives and history are taught in schools to the next generation.

If you would like to discover more about our Extra Care Schemes or Care homes please visit: https://www.clwydalyn.co.uk/find-a-home/