The Welsh housing association waging a war against poverty

Unwilling to stand by and watch as the effects of poverty rip through society’s poorest, social landlord ClwydAlyn has decided to fight back.

Liam Turner caught up with its CEO, Clare Budden, to find out more about the bold ways they are supporting their tenants – and why resistance is far from futile.

There is a war raging across the UK. It’s a hidden war, both silent and unseen, yet the effects of its devastation are all too clear – from the lines on people’s faces to the worn brick of their homes. The enemy, poverty, may be an old one; but its wrath is full of vigour.

However, a resistance movement is growing, and one of those fighting back is social landlord ClwynAlyn and its CEO, Clare Budden.

ClwydAlyn operates in North Wales, one of the poorest regions in the UK. In some of the least affluent areas, life expectancy is 11 years less than the national average, with healthy life expectancy around 15 years less. The reasons for these disparities – such as a lack of investment and an exodus of educated young people – are varied and complex, and they’re not something ClwydAlyn will be able to sort out on its own. But as CEO Clare Budden says, they can do something.

“As the leader in an organisation, you have such an opportunity to influence and shape the priorities of the business,” says Clare, who became CEO of ClwydAlyn in 2018.

“I worked with the board, our board members, and with our senior team, and with staff across the organisation and with our tenants, and we set a mission around poverty.”

Part of the reason why Clare feels ClwydAlyn is primely placed to help the communities they serve, and North Wales more generally, is because a lot of the poorer neighbourhoods in the region have a relatively high proportion of social housing. It’s an issue that directly affects the tenants and communities it serves, and it’s therefore an issue they can directly tackle.

So, how are exactly are they fighting back against such a pernicious, merciless enemy?

There are many tactics ClwydAlyn have deployed in its fightback, ranging from helping those in food poverty via its work with social enterprise Well Fed, to becoming one of the country’s first trauma-informed housing associations. Crucially, each one of them is built on the support ClwydAlyn provides to its employees.

“We can’t make this big mission around wanting to address poverty if people who work for us live in poverty themselves,” says Clare. 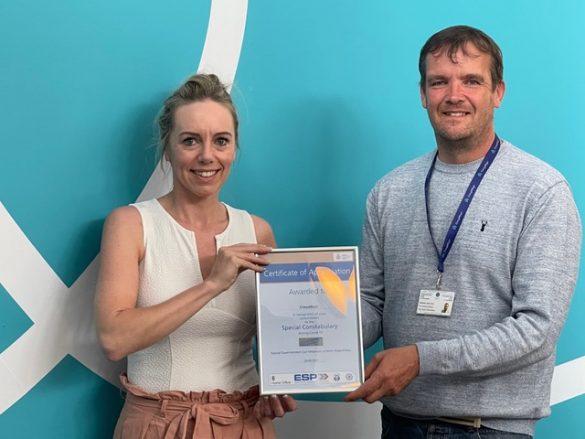 ClwydAlyn was recently recognised for its volunteering efforts during the pandemic

One of the first things ClwydAlyn did was to imbed “absolute equality” into its terms and conditions. This means the T&Cs for its senior staff are exactly the same as for its care workers and housing officers: they all receive the same amount of holiday, benefits, and bereavement leave.
Perhaps more notably, ClwydAlyn has made the bold decision to throw away its disciplinary, capability, and grievance policies.

“We believe that most people come to work intending to do a good job, and when things go wrong, it’s often a mistake or a bad judgment call, or lack or training or knowledge,” Clare explains.
“What we should be doing is having a culture where people feel confident to say, I’ve got it wrong, and we learn from it and move on. Organisations can waste a lot of money doing formal investigations into things, when that money could be being used to improve services to tenants.”
By helping its employees first, Clare believes it is more able to help its tenants. And there is a wealth of initiatives ClwydAlyn has rolled out to try to ease the struggles of some of its most poverty-stricken communities.

For example, each of its housing services staff now looks after 300 homes each, half of what they were responsible for before. Clare says this allows them to not only deliver a higher quality of service, but to develop a better understanding of each resident, so that, if they are having problems – perhaps with rent arrears – they are able to talk through those and come up with a favourable solution.
“When we looked at our housing service,” says Clare, “we had an anti-social-behaviour team, we had an income collection team, and we had very few people employed to provide proactive advice and support to tenants.

“We’ve changed things around now, and each of our staff now only looks after around 300 homes so they can get to know everybody and build trust with people.”

Arguably the biggest change ClwydAlyn has made is to completely do away with their evictions policy. Where one landlord might evict someone if their rent arrears grow too high, ClwydAlyn decided they would do their utmost to keep that person in their home. This was a decision made a year before the pandemic, when zero-eviction policies were far from commonplace.

It was a bold move, but one that Clare says has paid off.

“At the time, people said to me, oh, that’s very laudable, that’s a nice thing to do, but you’re going to find your rent arrears go through the bloody roof,” she recalls.

“If there isn’t a threat of eviction, why is anyone going to bother paying their rent? In fact, our rent arrears come down.”

She adds: “Most people are like me and you: I like to think that I can pay for the services I need, that I’m not trying to find a way to avoid paying my obligations.”

Although such policies pose an obvious financial risk to the business – one that has been avoided with the reduction in rent arrears – Clare believes they’re an invaluable weapon in the fight against poverty. Without them, she says, the impact on the wider North Wales economy would be much worse.

“What we know is that, if we take someone’s home off them, within a short while, they’ll be knocking on the local authority’s door, who have the statutory duty around homelessness to try and get somewhere else to live,” Clare says.

“So, that’s just a circle of, it’s bad for the person who’s lost their home, but it doesn’t make much sense from a societal perspective, either.”

She adds: “That doesn’t mean we would never move somebody, because sometimes the neighbour is at their wits end with the behaviour of somebody or the impact of what might be going on next door. But what we’ll do is a planned move, so we don’t push the problem onto another landlord.”

ClwydAlyn’s commitment to improve the quality of life for its tenants doesn’t stop there, either. It’s also looking to launch a partnership with another housing association to scale up its decarbonisation drive and is exploring ways to support local SMEs. Just some more of the way ClwydAlyn is fighting back for the sake of its tenants and communities.

Despite everything ClwydAlyn is doing to help its tenants, Clare is all too aware that they can only do so much. After all, the organisation only turns over around £50m each year. No paltry sum, but ClwydAlyn simply don’t have the scale of resources needed to alleviate the plight of everyone in their communities – let alone North Wales.

But help is at hand. The Welsh government, seemingly cognisant of the hardship being faced by poorer communities, has made a number of policy changes in recent years in an effort to stem the effects of rising poverty rates – by which Wales has been particularly affected.

It has put significant capital funding into building new homes and maintained housing support grants, which funds services for homeless people; and earlier this year, it launched a universal basic income pilot, something Clare said she was “delighted” to see implemented. 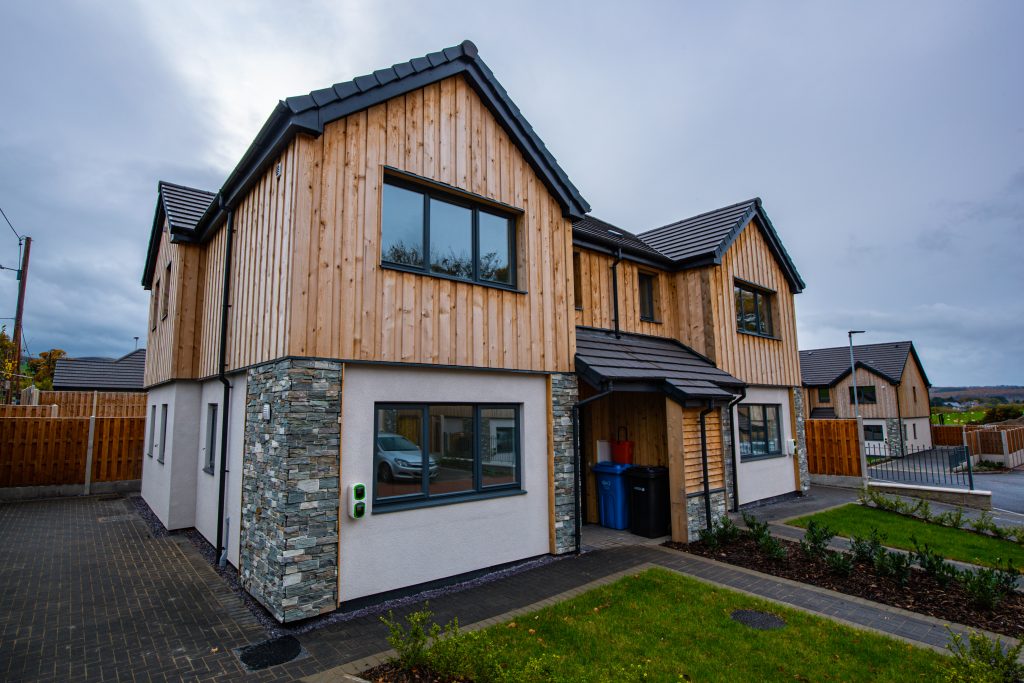 “I’d never ever go back to England, unless there was a very different political climate around housing”
Yet, Clare – who worked for Flintshire Council before moving to ClwydAlyn – is under no illusions about the level of support provided by the authorities, saying they “can always do more”.

“I think things like the rollout of free school meals, the pilot on Universal Basic Income, are all going to help families a bit, and the Welsh government are putting pressure on housing associations to keep rent increases down,” she says.

“They are using a number of the leavers that they’ve got, but child poverty levels have remained pretty much the same for the last 10 years in Wales, so we haven’t made big in-roads yet to really resolving [issues such as] childhood poverty.”
Shortcomings aside, Clare, who spent 20 years of her working career over the border before moving back to Wales, believes the Welsh government is handling housing and its concomitant issues better than its UK counterpart.

“I’d never ever go back to England,” she says, “unless there was a very different political climate around housing.”

“It does feel in Wales that the Welsh government has put their money where their mouth is.”

In 2020, ClwydAlyn completed a development of 38 timber-framed, low-carbon homes in Llanbedr Dyffryn Clwyd in partnership with the Welsh government

Digging deep
ClwydAlyn’s comprehensive efforts to support its tenants and communities has imbued Clare with a firm optimism. It’s an optimism bolstered by efforts on both a local and national level to improve the lives of people living in Wales and keep poverty at bay.

The fight is far from over, however, with a barrage of rising energy bills, food costs, and fuel prices now pummelling society’s poorest. Not to mention that many of those worst hit will still be reeling from the impact of the pandemic and a decade of austerity.

“We do expect that, over the next year, arrears are going to increase,” says Clare. “When the pandemic started, I think lots of associations were initially concerned about the financial impact of COVID, and actually, most associations have managed the impact of COVID during the pandemic well.
“I think the challenges now are going to be with inflation, fuel costs, food costs, getting the economy back up and running.”

The challenges are indeed many, and they are mounting, but Clare feels ClwydAlyn is prepared to meet them head on.
“What we need to be doing is some bigger, bolder things, that may be a bit more risky, that are going to take more investment, and more time,” she says.

“Because if we want to get to a place where more people in North Wales – and we can’t solve poverty for everybody in North Wales, we’re only a £50m a year turnover business – but if we can, where we can, help create valued jobs that pay people well, then people will make good choices for themselves about their lives"