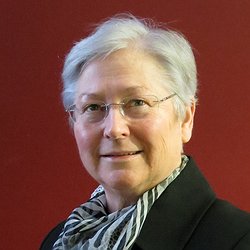 Sandy joined the ClwydAlyn Board in July 2016 and is the former Assembly Member for Delyn, standing down after 13 years at the Senedd.  During her time at the National Assembly, Sandy was involved in scrutinising the Welsh Government’s Housing Legislation as Chair of the Communities and Culture Committee. She was also a Founding Member and Chair of the Cross-Party Group on Housing.  Previously, Sandy was also an Assembly Commissioner with a wide corporate portfolio ranging from security to equalities.

Sandy has also worked as a journalist for many years as well as in education and the voluntary sector. She was, for more than 15 years, a Councillor in Wrexham, chairing the Social Services Committee, as an Executive Board Member and was Mayor in 2001/02.  Sandy has also been a Home Office Appointee to the former North Wales Probation Board and is an Honorary Fellow at Wrexham Glyndwr University.